Lighting up the night’s sky – The Fallas

Lights, gunpowder, music, traditional costumes and giant colourful papier-mâché figures, just a few of the things you can expect to see, should you venture to Valencia in Spain during the festival known as The Fallas.

Roughly translating into English as ‘the fires’, The Fallas is a festival like no other. Held each year from March 15th to 19th, the festival celebrates the final days of winter and the arrival of spring with endless activities over four days filled with flames, fireworks and fallas (torches).

Falling during the feast of Saint Joseph (the day of the father in Spain), The Fallas is one of the most traditional festivals in Spain and one of Europe’s wildest street parties. During these four days in March, this festival transforms the city of Valencia into one big carnival. 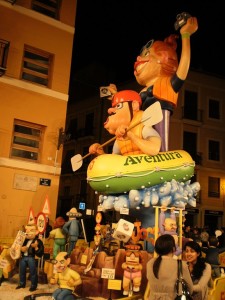 Giant figures that take over the city’s streets

Taking centre stage at this carnival are the giant papier-mâché figures that are created for the celebrations. Every year, each neighbourhood in the city has an organised group of people called the Casal faller who work all year long holding fundraising parties and produce these constructions known as the ‘ninots’ (Valencian for puppets or dolls). During the four days leading up to 19th March, each group will parade their ninot on the city’s streets before mounting it on an elaborate firecracker-filled cardboard and papier-mâché monument where it becomes known as a falles.

Each year, the falles are constructed according to an agreed theme. This is traditionally a satirical swipe at anyone who has drawn particular attention. Although The Fallas is largely a traditional festival, in previous years falles have included modern characters such as Shrek, George W. Bush, Barack Obama and Lady Gaga.

The history of The Fallas

Said to stem back to the Middle Ages, The Fallas is believed to have started when local artisans would dispose of the broken artefacts and pieces of wood that they had collected up all winter by burning them to celebrate the Spring Equinox. In particular planks of wood called parots, used by carpenters to hand their candles on to provide light in the winter, would be burnt as they would no longer be needed. With the intervention of the Church, the date this took place was moved to coincide with the celebration of the festival of Saint Joseph, the patron saint of carpenters.

Over time, the traditions of The Fallas began to evolve and the parots were dressed with clothing so that they looked like people. Over the years the parots became ninots and were modelled after well-known characters. 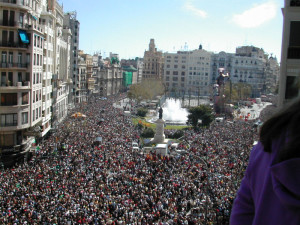 A celebration that has spawned a huge local industry

In recent years, the production of falles has spawned a huge local industry with an entire suburban area of the city being designated the Ciutat fallera (City of Falles). In this area, crews of artists, sculptors and painters spend months utilising paper, wax, wood and Styrofoam to produce these figures.
When the town wakes after the plantà (overnight placement of the falles) on the morning of 16th March, more than 350 have been erected. Reaching up to 15m in height, with the most expensive costing more than €350,000 to build, these colourful and grotesque effigies often satirise celebrities, current affairs and local customs.

Filled with festivities, the five days and nights of The Fallas are one continuous party with historical, religious and comedy events all taking place as people spill from restaurants out on to the city streets.

During these festivities, explosions can be heard all day long and all through the night as everyone from small children to the elderly throw fireworks and firecrackers in the streets.

Every day at 2pm, the sound of firecrackers can be heard ripping through the Plaza del Ayuntamiento in the noisy event called la Macleta. A concert of gunpowder, this event sees each neighbourhood competing with one another and ends with the terremoto – or earthquake in English. 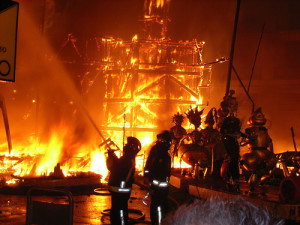 A finale filled with fireworks and flames

On the final night, The Falles features a finale that is filled with fireworks and flames. As the clock strikes midnight, the brightly coloured effigies of the falles are laden with fireworks, burnt and transformed into gigantic torches.

Away from the falles, the city resembles an open-air dance party as people fill the streets, though in the place of music there is the sound of fireworks being thrown around randomly.

Should you wish to experience The Fallas for yourself, visit Valencia between March 15th to 19th. Alternatively if you cannot make it to Spain, why not bring spring in with a festival and fireworks of your own? Visit Jordans Fireworks who will have all of the fireworks to suit your needs.