With more than twenty well-known museums, Paris is regarded as one of the top European cities with a rich cultural and historical background. Several museums that bring out a different taste of artwork and perspective operate in the French capital, and they act as some of the main tourist attraction destinations to families and backpackers alike. The Louvre Museum in Paris is the largest in France and has collections that show the historical way of living of the ancient and modern people of France, and also the world at large. If you’re thinking about visiting Paris this year, here’s some other great museums you shouldn’t miss out on!

This museum was the workshop of Antoine Bourdelle, 1861-1929, and was named after him to honour his great masterpieces of sculptors and carvings that continue to amaze many people. Although initially meant to contain the works of Bourdelle alone, other artists and sculptors’ works are now available for display at this museum. The Bourdelle Museum in Paris is emerging as one of the best museums to visit across the city and has over 500 artworks of sculpture carved from some of the finest materials that include bronze, marble and plaster.

Regarded as the official French fine-art center, the Carnavalet museum in the Marias district, Paris is one of the best museums in the French capital with a wide collection of drawings, paintings, and decorative artworks. Here, you will get some of the best paintings from some of France’s finest painters that include Jean Fouquet and the legendary Nicolas Dipre. The Carnavalet museum is also home to thousands of other ancient and modern artworks that define the history and culture of the France. Works by international sculptors and artists are also available. 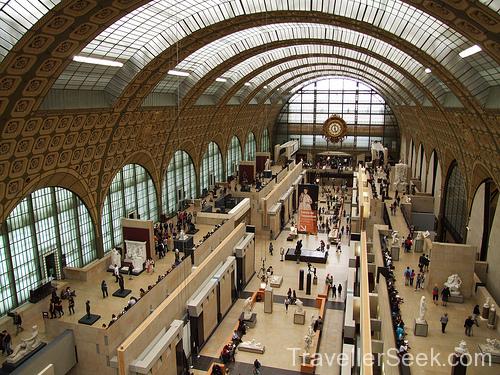 This classical modern art museum is the second largest, and one of the best museums in France. Home to amazing art galleries which display more than 5,000 artworks, here you can find spectacular works by Van Gogh, Manet and many more! The modern performance art by ethereal dancers, combined with the beautifully furnished rooms will no doubt make you want to visit this world class museum again. Musee d’Orsay also has some of the finest art displays by renowned French artists that continue to intrigue fine-art enthusiasts. Be sure to compare prices on airfares to Paris online at Cheapflights.co.uk before you book this year, as you could get yourself a great bargain!

This museum of modern art was opened in 1961 and has some awesome fine art galleries by some of the best artists in France. The Grevin Museum is also home to some classical modern artwork and therefore plays a major role in appreciating the efforts made by the modern artists in Paris. This museum is also well designed with an ultramodern amphitheatre that acts as the main stage for performance arts. These include modern and historic French plays, songs, and storytelling acts, and there are even shorter shows performed for the kids!