The Volcanoes of Iceland

Icelandic volcanoes have become the topic of conversation lately with the recent eruption of the Eyjafjallajökull (pronounced “AY-yah-fyah-lah-YOH-kuul”) volcano which has caused a major disruption to air traffic over Europe.

The fact is, Iceland is one of the most volcanically active places on Earth. It has 130 volcanic mountains, and 35 active volcanoes of which 18 have erupted since Iceland was settled in 874AD. These eruptions, over the last 500 years, have resulted in Iceland receiving about one third of the world’s lava output during that time. 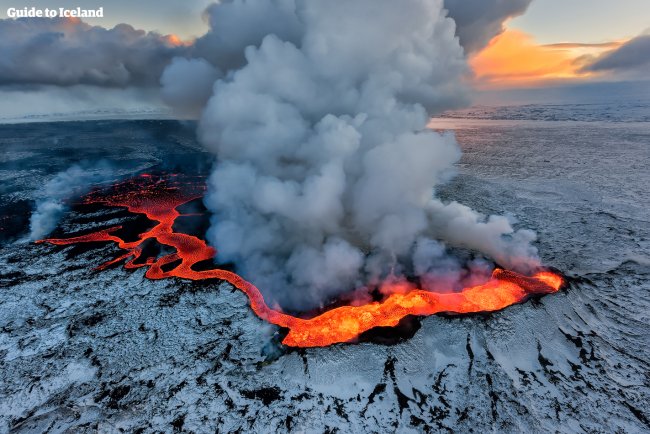 This large amount of volcanic activity is explained by Geologists as the result of Iceland sitting on top of the mid-Atlantic ridge as well as a extra-hot plume of magma known as a hotspot.

The continental plates on either side of the mid-Atlantic ridge are pulling away from each other allowing the plume of magma to come to the surface. Iceland in effect is being pulled apart and the space in the middle is being filled by the upwelling magma to form the landmass, causing the island to continually grow in size. Perhaps in millions of years Iceland will be as large as some of Earths other continents.
Despite the angry belching of ash and lava, Eyjafjallajökull is not the most active volcano in Iceland. That honor belongs to Mount Hekla, which during the Middle Ages was believed to be either one of the gateways to Hell, or the prison of Judas Iscariot, the disciple who betrayed Jesus. Fortunately, at the moment Mount Hekla is not very active, and can be climbed as part of a volcano tour.

While the Eyjafjallajökull 2010 eruption isn’t the most powerful the world has seen, it has vented a phenomenal amount of lava and ash into the air. Current estimates are that Eyjafjallajökull has produced 70 to 80 million cubic metres of magma at a rate of about 750 tonnes every second most of which is being ejected in to the upper atmosphere.

Inside the Volcano: Going Inside the Thrihnukagigur Volcano in Iceland

It’s this cloud that is currently causing so much trouble for air travel in Europe. The ash that is going into the air is very fine and can easily be sucked into jet engines. The high internal temperatures of the engines melt the ash, turning it to glass and cause the engine to fail.

However, if you are looking for a very different vacation, consider Iceland. This is a geologically young country and consequently has some of the most rugged and beautiful landscapes in the world. Coupled with the opportunity to visit and see active volcanoes, and just a hint of danger, Iceland is a must go destination for volcano tours.