The Na Mele Nei, the Music of Hawaii Today, is a concert of free, live music presented weekly for locals and vacationers alike. These concerts feature Hawaii’s best local entertainers, hula dancers, musicians, and has everything from traditional Hawaiian music to jazz and reggae. On some occasions special guest artists will make an appearance. 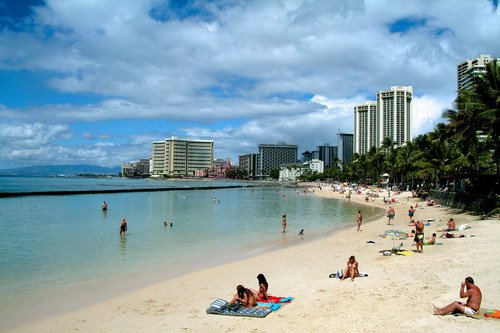 The Bishop Museum was founded in 1889 for the purpose of collecting the Hawaiian artifacts of the royal Kamehameha family. It now has millions of artifacts, documents, and photographs from the royal family, Hawaii, and other Pacific island cultures. It is the largest museum in Hawaii and has one of the largest natural history collections in the world. It is known throughout the world for its research projects, cultural collections, and education programs.

Diamond Head, known to the islanders as Leahi, is a tuff cone (volcanic cone) located on the east coast of Waikiki (Honolulu). The former volcanic site, now a state monument, was given its name by British sailors who mistook the crystals in the rock for diamonds.

The USS Arizona was part of the United States Naval Fleet and was launched for the first time in 1915 as a part of the United State Presidential convoy that carried President Woodrow Wilson on many different occasions during World War I. She was a part of the attack on Pearl Harbor in 1941, and 1,103 of the 1,400 sailors aboard went down with her on that “Day of Infamy”. She was struck from the Naval Registry shortly thereafter and today Arizona’s wreck remains at Pearl Harbor, a memorial to her crew that died on that fateful morning.

Waikiki Beach is the shoreline for Waikiki, a neighborhood in Honolulu, and is one of the most famous and beautiful beaches in the world. The name means “fetched water” in Hawaiian and is the center of the tourist industry in Honolulu. It has crystal clear waters, glistening white sand, and offers activities such as surfing, kayaking, boogie boarding, wind-surfing, and snorkeling. With an average water temperature of 80 degrees all year, it is easy to see why the Waikiki Beach is often voted Best Beach in America. The Iolani Palace was the home to Kind David Kalakaua and Queen Lili’uikalani. It is the only royal palace in the United States that was used as a residence for a reigning monarch. It has been declared a National Historic Landmark and is on the National Register of Historic Places. It was opened in 1978 for special events and public tours.