What to call this place? It doesn’t have a nickname. I was thinking City of Handbrakes (since you would have to have a car with a working handbrake to drive in this place) or red run city since if you cleared the houses and installed some ski lifts you would have the ideal intermediate ski grounds…

Hee hee.. You gotta see the photos. Or how about Misty City.. I still haven’t seen the bridge !!

Anyway enough with the names..

After a rather long Greyhound bus ride through the night I arrived in San Francisco.It’s a bit intimidating arriving in a city at 5:30am when it is still dark and hanging out with lower income group locals (Greyhound is not the most upper-class means of travel). However I made it to the Youth Hostel (very central) packed up my bags and hit the email by 7:30 leaving me with a big day ahead. 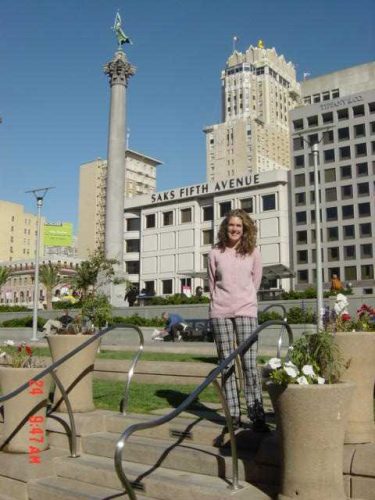 Me in Union Square – very early in the morning !!

As you might see form the photos, I didn’t actually go into many of the museums and things but I had a great day wandering the streets and marveling at the gradient of the hilly landscape. Those cable Cars are way cool !!! I loved them. I also really loved the windiest street ever Lombard street and missioned half way across town to see it. One of the greatest places to get a good view of the city is from the Telegraph Hill in the Coit Tower. The view is great (especially of Lombard street and the Bay bridge but unfortunately the mist seems to have rolled in for the week and the Golden Gate bridge is lost in a cloud !! How disappointing!

The Youth Hostel was great. They have stuff going on every day. That evening a whole bunch of the guys was going to a San Francisco Giants Baseball Game. After a bit of deliberation I decided to follow them all and had a great time (in the cold) eating Nachos and hotdogs and learning the finer elements of baseball. (Alex had given me a few pointers so I knew a bit). One of the girls was a psychic and had travelled up from San Deago (which was a bit silly because she should have known the Giants would win 6-0)

Went out to a club at 11pm after the game – very cool but didn’t see any Gay people – what is this ??? no Gay people and no Golden Gate bridge … I think I am missing something !!

Anyway after such a late one last night this morning I got up late and didn’t do as much as I could. Tried to make the Planetarium but missed it by 5 mins and went to the japanese garden instead. I loved the Cable Car Museum too… Fanscinating how something so mechanical can work for so many years and so effectively. It was orginally built because the horses were having trouble pulling the carts up the hills. All runs on a cable that rotates and the cable cars hook on to the cable.

Met up with my boss from Cable London Mark Ashley this afternoon in Dublin/Pleasanton. What a beautiful house – typical suburbia, BMW SUV – nice one ! cats and a pool !!